The 1903 edition of In the Seven Woods: Being Poems Chiefly of the Irish Heroic Age by W.B. Yeats (1865 – 1939), is a small book in quatro held in the Special Collections of the University of Victoria Library.

The 1903 edition of “In the Seven Woods” held at the University of Victoria Library, image: @KatarzynaAnn

The book was published in July of 1903 by Elizabeth Yeats (1868 – 1940), one of the author’s sisters, at the Dun Emer Press. Dun Emer Press was an important press of the Celtic Revival, founded in 1902 by Yeats siblings, Elizabeth and William. The press produced hand-printed, limited editions of Irish authors, e.g. Lionel Pigot Johnson, Douglas Ross Hyde, George William Russell, William Kirkpatrick Magee, William Allingham and W.B. Yeats. The text of 1903 edition of In the Seven Woods was double printed, parts of the text are in red ink, remaining parts in black ink.

The title page of the book reads:
“IN THE SEVEN WOODS : BEING POEMS | CHIEFLY OF THE IRISH HEROIC AGE | BY WILLIAM BUTLER YEATS”
“THE DUN EMER PRESS | DUNDRUM | MCMIII”
A blind stamp in the middle of the title page reads “University | of | Victoria.”

The rubricated colophon reads:
“Here ends In The Seven Woods, written by William | Butler Yeats, printed upon paper made in Ireland, | and published by Elizabeth Corbet Yeats at the | Dun Emer Press, in the house of Evelyn | Gleeson at Dundrum in the country of | Dublin, Ireland, finished the six-|teenth day of July, in the year | of the big wind | 1903.”

The colophon of the 1903 edition of “In the Seven Woods” held at the University of Victoria Library, image: @KatarzynaAnn

Even though the colophon suggests that the book was printed on paper made in Ireland, the fly leaves are of a Dutch origin. Front fly leaf 2 contains a partial watermark “VAN GELDER ZONEN,” while the rear fly leaf contains a partial watermark, which is similar to the one found in the 1891 edition of  The Picture of Dorian Gray, which also originated from Van Gelder’s mills. Most likely the same paper was used for the paste-downs, but the chain lines of front fly leaf 1 run vertically, while on front fly leaf 2 they run horizontally. The tight binding does not allow closer examination of the paste-downs.

Watermark “Van Gelder Zonen” in the 1903 edition of “In the seven woods,” image: @KatarzynaAnn

The book-block is build of nine gatherings of woven paper (4o: A2 b-i4). The leaf size is 199 x 139 mm (the sheet of paper had to be approx. 300 x 400 mm), the cover size is 203 x 143 mm. The cover is made from a thick bright parchment, with a gilded title embossed. The book block is also gilded. The gatherings are sewed together with a green thread, and green cloth ties are used to tie the book at the fore edge.

Cloth ties and gilded edges of the 1903 edition of “In the seven woods” at the University Victoria Library, image: @KatarzynaAnn

Not much is known about the provenance of this book, and how did it arrive to Victoria B.C. from Ireland. There are, however, traces of notes made in pencil, which were erased and thus illegible today.
The erased text on the top margin of front fly leaf 1 seems to read: “[000…000] G. H[0000]sser [000…000] (?)”
The erased text on the bottom margin of front fly leaf 1 is probably a signature: “[000…000] / 2/13”
Both notes might be associated with the books seller, or the previous owner of the book. Especially intriguing is the question mark at the end of the upper note. Multi spectral scanning and advanced image processing could probably allow us to read the notes and advance the research of the history of this book. 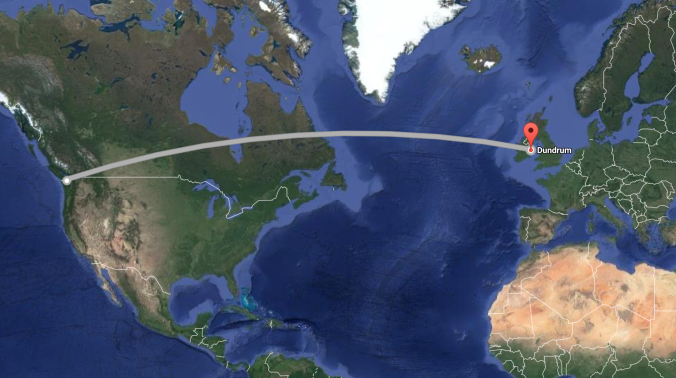 The location of the Dun Emer Press and distance to Victoria, image: maps.google.com